Anato[me] of a Gay Relationship

All too often I hear the same love story; boy meets girl, girl meets boy, they fall in love and they live happily ever after. Time has changed. While the notion of homosexuality dates back for many centuries, there has recently been much heated debate over the legality of same-sex marriage. We are at a turning point in society where, according to recent polls, a majority of United States’ citizens are in favor of same-sex marriage.

This series titled Anato[me] of a Gay Relationship depicts a new story, a new frame of reference about “me” and the other countless same-sex couples fighting for equal marriage rights. This series is comprised of 8 diptychs. I draw inspiration from Michelangelo, Robert Rauschenberg, Kehinde Wiley, Jim Dine, Elgin Marbles, and OUT Magazine. Each diptych contains a collage of sensual images that go through the series of a gay relationship, from boy-meets-boy to a permanent and loving commitment between the two. 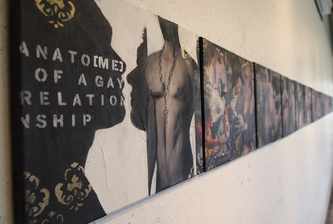